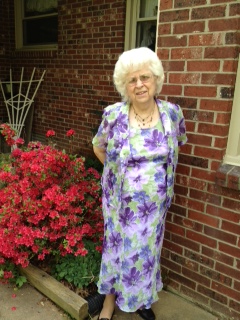 Departed on February 3, 2016 and resided in Goodlettsville, TN

Virgie Susan Williams Robinson, age 92 of Goodlettsville passed away February 3, 2016 at her home. Mrs. Robinson was born in Tompkinsville, KY on April 3, 1923 to the late Frank and Jeanie Bell Webb. In addition to her parents she was preceded in death by her first husband, Clarence Edward Williams in 1983 and her second husband, Ottie Clay Robinson in 2010; she was also preceded in death by her sons, W.D. Williams and Stephen Williams; granddaughters, Sherry Williams Berry and Emily Clark and her sister, Iva Tuck. Virgie’s children described her as “the best Mama in the world”. She made everyone feel special and like they were her favorite; above all things she always made sure her children were provided for. Mrs. Robinson is survived by her children, James “Jimmy” Williams (June), Helen Adams (Ron) and Naomi Clark (Jimmy); 17 grandchildren; 25 great-grandchildren and sister, Virna Davenport. A life celebration service in her honor will be held on Saturday, February 6th at 10:00 A.M. from the Chapel of Cole & Garrett Funeral Home in Goodlettsville with Bro. John Buck officiating. Interment will follow in Spring Hill Cemetery. Visitation with the family will be on Friday from 4-8 P.M. and on Saturday one hour prior to the service. Arrangements Entrusted To: Cole & Garrett Funeral Home, Goodlettsville (615)859-5231 www.coleandgarrett.com