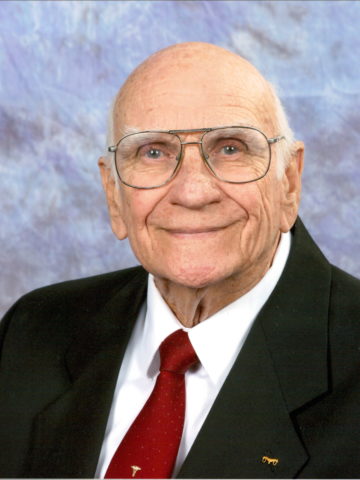 Departed on August 23, 2016 and resided in Goodlettsville, TN

Thomas M Osborne, DDS, age 93 of Goodlettsville, died Tuesday August 23.
He is survived by his children, T.M. Osborne, Jr., William O. Osborne (Lisa), Lori O. Cordell (Jeff). He is also survived by his grandchildren Dr. Kathryn O. Newman (Luke), Jane Ann Sullins (Cory), and Brice O. Cordell (Lauren), and two great-granddaughters with another on the way. Also surviving are nephews Joe Mulcahy (Merrie) and James Shannon (Laurie).
Dr. Osborne was born in Springfield, TN on December 23, 1922 to Thomas Monroe and Weltha Honeycutt Osborne. In addition to his parents, he was preceded by his wife of 63 years Jane O’Neal Holman Osborne and his sister Gladys Tolbert. He graduated from Springfield High School in 1942.
He served in the US Army during WWII, attended MTSU and graduated from the University of Tennessee College of Dentistry in 1950. Dr. Osborne practiced dentistry in Goodlettsville for 40 years. He was an avid golfer, scoring seven holes-in-one. He particularly enjoyed being a member of the Greenbrier Country Club.
The family will receive friends Thursday from 4-7pm at Connell Memorial United Methodist Church, 113 Church Street in Goodlettsville. A celebration of his life will take place at the church on Friday August 26 at 12 Noon.
Honorary pallbearers will be the Kitchen Sunday School Class, special friends Joe and Barbara Haynes, George and Sue Frost, Doug and Nell Clay, and Billy and Linda Dorris.
In lieu of flowers, the family requests memorial donations to be made to the Connell Memorial United Methodist Church, or the Goodlettsville Help Center, 108 Depot Street, Goodlettsville, TN 37072.