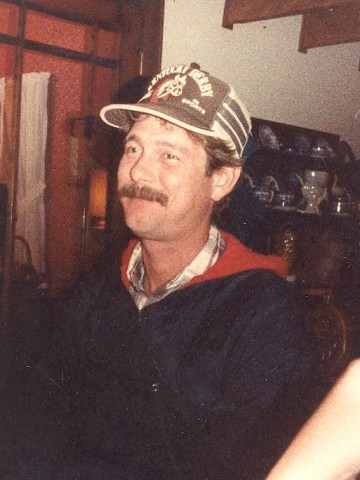 Departed on February 2, 2013 and resided in Goodlettsville, TN

STONE, Steve P.Steve was born on September 1, 1952 to Forrest McMurtry Stone and Ruby Pollard Stone who both preceded him in death; he died on February 2, 2013. Steve is survived by his brother and sister-in-law, Jerry F. and Nancy Stone and by his sister, Cathy A. Stone. Also surviving is his aunt Portia P. Eidson and two half-aunts, Linda Pollard Hankins of Hereford, Az and Susie Decker Brown of Ruskin, Fl. Steve is also survived by his nephew, Nathan (Nickie) Stone and nieces, Anita (John) Barnard and Elizabeth (Mike) Vaughn. Steve has nine great-nephews and great-nieces and two great-great-nephews. Also, surviving is his close friend, Amanda Baker. Steve attended Isaac Litton High School and served in the Navy aboard the USS Tattnall. He loved kitty cats, fishing and horse racing and was known by many friends as "Skillet" or "Stoney". Special appreciation goes to Darlena and Dennis Clark for taking him on his last fishing trip, to Barry Vance for Steve's last boatride on Old Hickory Lake, to Amanda Baker for taking him to his last Kentucky Derby and to Buddy Williams for all he did for Steve. The family thanks Dr. Waleed Khalaf and all the doctors and nurses who treated Steve at the Nashville VA hospital and Mary Alice, Jennifer and Mark of Alive Hospice. All of them demonstrated true compassion to him. Visitation with the family will be 4-8 p.m. on Sunday, February 3 and noon to 1 p.m. on Monday, February 4 at Cole and Garrett, 127 N. Main St. Goodlettsville. Steve will be buried next to his parents at the Cole Cemetery on Melton Road in White House where a graveside service conducted by Rev. Malcolm Patton will be held at 2 p.m. on Monday. Honorary pallbearers will be Betty and Donald Landers, his favorite "cuz". Serving as pallbearers will be Nathan Stone, John Barnard, Mike Vaughn, Forrest Stone, Joseph Barnard, Jonathan Barnard, and David Birdwell. In place of flowers, please consider a donation in Steve's memory to Old Beech Church Building Fund, 3216 Long Hollow Pike, Hendersonville 37075 or to your favorite charity . COLE & GARRETT FUNERAL HOME, (615)859-5231.