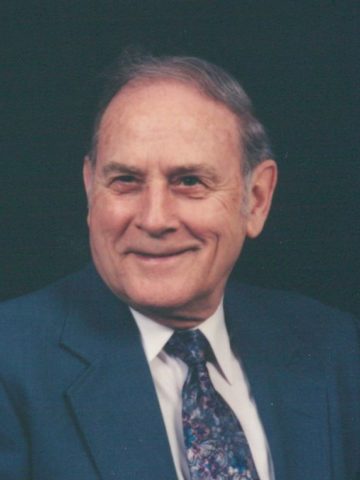 Departed on January 5, 2017 and resided in Nashville, TN

Roy was married to Eva from October of 1954. Roy cared for and honored her until her untimely death with Alzheimer's in March of 1988. Following her passing, he was remarried to Sue in July of 1988. In his last weeks he would not be able to furnish Sue the care he lived to give. Her constant care was supplied by Jamie Hill, his daughter in law, and Sonya Nixon Gotshall, his great niece. The family is very appreciative for all the care these women provided.

Roy moved to Nashville at age three with his family. He started attending Grace Church of the Nazarene when he was four and became a member on January 1, 1930 at the age of seven. He served the church faithfully as an outstanding layman in many roles, including his tenure for decades as a Sunday School teacher.

During elementary school, Roy worked delivering newspapers on Douglas Avenue to help support his family. He continued to attend school until 1939, the end of his tenth grade. He went on to work as a cashier in a Young's grocery and meat market. Following, he was employed by Tennessee Book Company as a receiving and shipping clerk.

Roy was inducted into the United States Army during World War II. He came to be an assistant squad leader, and carried out his duties as a longshoreman and rifleman. From March of 1943 until December of 1945, he served his country in the Aleutian Islands. Following his military service, he returned to Tennessee Book Company until retirement.

Throughout his life, Roy's love for Christ overflowed as he showed compassion to those around him. He had a humble spirit and a strong resolve to work hard, care for his family, and follow Jesus. Roy believed in the power of prayer, and throughout his years, lifted up the names of many to the Lord. There is no doubt he leaves behind an everlasting legacy of selflessness, love, and kindness. Even though he will be deeply missed, his legacy will live on because of the life he lived before us.

Visitation will be on Monday January 9 from 4-8 pm at Grace Church of the Nazarene, 2620 Pennington Bend Rd, Nashville. Celebration of life will be at the church on Tuesday January 10 at 11 am with visitation one hour prior to service time. Dr. David R. Nixon, Rev. Jonathan Trees, and Rev. David Hill, officiating. Interment to follow at Woodlawn Memorial Park with military honors.

In lieu of flowers, the family requests donations be made to CrossBridge to support the KidPOWER program. Donations can be mailed to 335 Murfreesboro Pike, Nashville, TN. 37210.