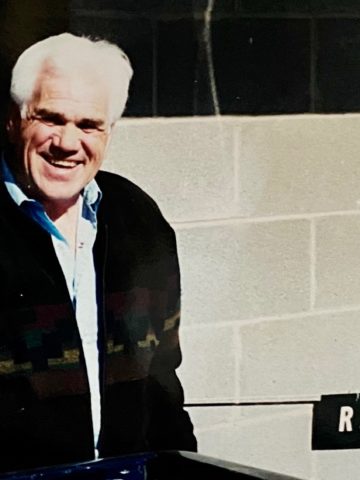 Departed on September 18, 2020 and resided in Portland, TN

Roger Anderson, 88, born May 25, 1932, was born in Richmond, Indiana and raised on a dairy farm with his six siblings, Terrence, Bernetta, Jr., Jack, Yvonne and Bill.
Roger was “graduated” from high school and served two years in the Navy. After returning from deployment, Roger met Joyce, his wife of 65 years, at the Richmond roller-skating rink, and they’ve not known life without each other since.
In 1966, Roger and Joyce moved to Hendersonville, Tennessee with their two daughters, Teresa and Kim. Later they settled on their hundred acre farm in Portland, Tennessee where he spent the next 42 years training and racing quarter and thoroughbred racehorses.
His family grew into 4 grandsons, Travis, Justin, Josh and Kyle, granddaughter, Jessica, great granddaughter, Holland and countless honorary children and grandchildren who Roger embraced and invited into his family.
Roger’s siblings will remember him for falling asleep at the wheel; his wife will remember him for three kisses when he left on a trip; his daughters will remember him for his hatred of red winter coats; his grandkids will remember him for the wisdom he shared during long truck rides; we will all remember him for the seam in his blue jeans and contagious smile.
Roger passed on September 18, 2020. He will be celebrated at Cole & Garrett Funeral Home White House on Monday, September 21st from 4-8pm and put to rest on Tuesday, September 22nd at 2pm.