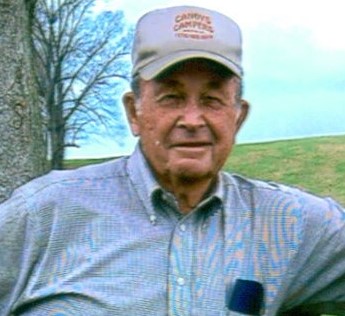 Departed on December 1, 2019 and resided in Greenbrier, TN

Robert V. Troupe, 93, of Greenbrier, passed away Sunday, December 1, 2019 at Brookdale of Goodlettsville. Born in Columbia, TN, March 1, 1926, he was the son of the late Earl Troupe and Cammie (Akin) Troupe. Robert was also preceded in death by his wife, Dorothy N. (Hutson) Troupe, a great-granddaughter, Chelsea Lynn Groves, and all of his seven siblings. Robert retired from Dupont where he had worked as an electrician for 28 years. He was the last employee of Dupont to receive a wooden tool box upon his retirement. The toolbox remained a prized possession of his and a symbol of his accomplishments at Dupont. Robert was also a farmer and trader. Early on he had cattle and he continued to farm after selling off his stock. He enjoyed his time on the farm, going to farm auctions and trading just about anything that he could buy and hold for a time pending a sale for a profit somewhere down the road. He was an extremely hard worker and was thought of as a great provider by his family. Family was perhaps the most important thing to Robert. He loved family reunions, being the caretaker of his family and just plain being with his family. He was proud to instill a legacy of financial and life responsibility in his children and grandchildren as they were growing to adulthood. This was just one aspect of his character that caused them to think of him as a “great” father, grandfather and great-grandfather. He also enjoyed being a regular at the Cracker Barrel on Long Hollow Pike, his Ritz crackers with peanut butter and coffee. Robert was also proud of his service to his country. He served in the US Army Air Corps during World War Two. He served in the Asiatic pacific theater and received bronze battle stars for his service there as well as for service in the liberation of the Philippines. Robert is survived by his three children, Linda Adams (Jack), Deborah Davis (Lynn) and Michael Troupe (Janice); seven grandchildren, Ken Davis, Jody Davis (Julie), Angie Groves (Patrick), Chrissy Kemp (G.W.), Shane Troupe (Michelle), April Rives, and Jeff Adams (Katie); ten great-grandchildren and several nieces and nephews. Visitation will be held Wednesday from 4 to 8 PM and Thursday from 12 to 1 PM at Cole & Garrett Funeral Home, Goodlettsville. A Celebration of Life Service will be held at the funeral home Thursday at 1 PM followed by burial with Military Honors in the Mayes Cemetery, Greenbrier, TN. Grandsons and family will act as pallbearers. The family would like to express their gratitude and thanks for the care and services provided by Northcrest Hospice (Comfort Care) and also the staff at Brookdale Memory Care in Goodlettsville