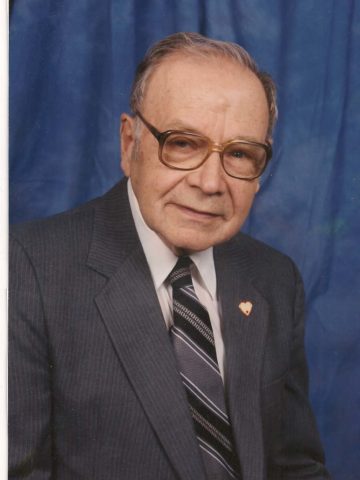 Departed on January 17, 2017 and resided in Pembroke Pines, FL

Rev. Fulton was born Dec. 14, 1918, the son of Robert Monroe and Susie (Reed) Fulton, the youngest of three children reared on a farm near Burgettstown, Penn.

A Graduate of Bob Jones University, Greenville, S.C., he served more than 50 years as a pastor, beginning at the Baptist Church in North Branch, Mich., where he was ordained April 28, 1941. He married Opal Pauline Brooks Nov. 12, 1941 in Nashville. She died in 1992 after 51 years of marriage. He is also predeceased by his parents, a brother and sister, daughter Marla Broughton and son Paul David Fulton. He is survived by his daughter Joy Thompson (Kim), Topeka, Kan., six grandsons, one granddaughter, seven great-grandchildren, nieces and nephews and a foster daughter, Joyce (Ben) Moulder, Shelbyville, Ill.

His long ministry included two years as a missionary to Haiti, where he taught in the National Bible Institute in Port-au-Prince, originating three Bible courses and translating them into French. He also served as pastor of churches in Mattoon, Ill. Talma, Ind., Ottumwa, Iowa, and Monroe, Wisc., and taught at Christian day schools in Watertown, Wisc., and Phoenix, Ariz.

After retiring to Hendersonville, Rev. Fulton served many years as pastor of the Hendersonville Bible Church. At age 86, he was honored as 2005 Samaritan of the Year and recognized for service to the National Healthcare nursing home, where he held Bible studies and taught Tai Chi, and for distributing commodities for the Hendersonville Samaritan Association more than 15 years. He is remembered as a man of God.

Memorial contributions for missionary outreach to Haiti may be made to Mountain Faith Mission, P.O. Box 433, Sparta, Tenn.38583.