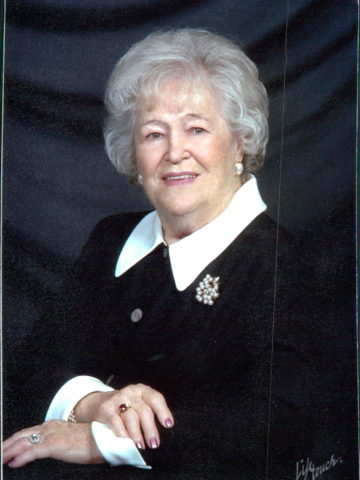 Departed on January 27, 2017 and resided in Hendersonville, TN

Opal Lou Wallace of Hendersonville, TN passed away January 27th, 2017. Opal was the daughter of the late Orvil Henshaw and Jessie Reid Henshaw. She was born in Paint Rock, AL on July 26, 1921.

Opal grew up during the Great Depression in Paint Rock Valley, AL and went to live with her older sister, Ruby in Scottsboro, AL when she was old enough to attend high school. She graduated from Scottsboro High School. She met Wayne Wallace through her high school friend Eunice Wynn. Eunice was dating Wayne’s older brother Jeff at the time, and they were later married. Soon after, Opal and Wayne married in Hollywood, AL.

Wayne and Opal moved many times in the early years of their marriage, while starting their family. Their oldest daughter, Judy was born in AL and their next daughter, Janie was born in Chicago, IL. Fourteen years later, their third daughter, Sheri was born in Nashville, TN. At that time, the Wallace family lived in Madison on Donna Drive. Soon after building the house on Donna Drive, Lester Flat and Earl Scruggs bought the houses on either side. That began a long friendship with both musical families.

Wayne and Opal loved to fish and spent all of their spare time out on the lake. After living on the lake for almost 30 years, they moved closer in to Hendersonville, where Opal lived until she moved to Park Place Retirement Center.

At Park Place, Opal had many friends from church and so enjoyed evenings after dinner playing Rummy Cube and Dominoes. Although most of the family is spread across the country, she always treasured the times when she could go to visit them and when they came to visit her.

Her friends and caregivers will miss her so much. Even though the family celebrates that she is now in the presence of the Lord, each of us will always feel her loss in a very personal way.