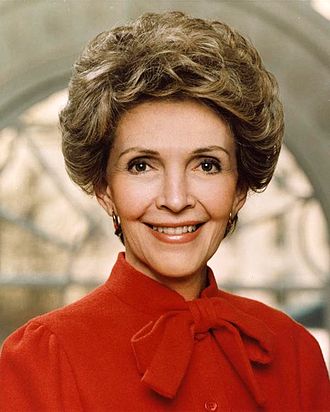 Cole & Garrett is posting the obituary information here in honor of Mrs. Reagan. Service events will take place in California at the Ronald Reagan Presidential Library.

Mrs. Reagan was born Anne Frances Robbins July 6, 1921, in Manhattan, the daughter of silent film and Broadway actress Edith Luckett and car salesman Kenneth Robbins, who divorced when she was a baby. She was adopted later by her stepfather, Loyal Davis, and her name was legally changed to Nancy Davis. After attending Smith College, she pursued a career in acting.

She met Ronald Reagan while under contract with MGM. They married on March 4, 1952.

In 1967, Mrs. Reagan became first lady of California as her husband was elected governor. As first lady, she became a member of the California Arts Council as well as supporting organizations, including the Foster Grandparents Program and charities devoted to helping veterans and people with disabilities. She served as first lady for her husband's two terms, from 1967 to 1975.

In 1981 she became the First Lady of the United States. In 1989 she returned to California and established the Nancy Reagan Foundation to continue her campaign to educate people about the serious issue of substance abuse. She served on the board of the Ronald Reagan Presidential Foundation, which was opened in 1991 and promoted her husband's legacy of leadership and freedom.

She is survived by her brother, Dr. Richard Davis, and two children with Ronald Reagan - Patti Davis and Ronald Prescott Reagan along with numerous nieces and nephews.

Learn more about Nancy and Ronald Reagan at the Reagan Foundation.

You may sign our community guestbook below, which will be sent to the foundation or you can sign the guestbook at the Reagan Foundation.