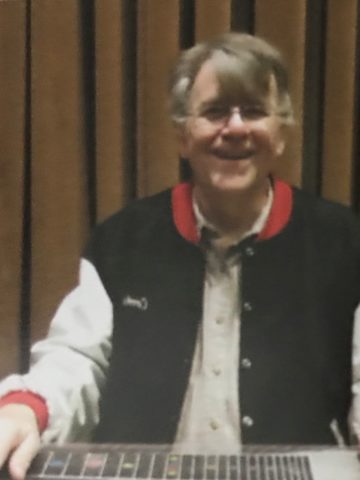 Departed on February 8, 2018 and resided in Goodlettsville, TN

Michael Wayne Jones, 65, died Thursday February 8, 2018. Born in Quincy, IL, August 30, 1952 he was the son of the late Kenneth W. and Thora (Werner) Jones. Mike graduated from Christian Brothers High School in Springfield and then moved to Nashville to embark on his career in music. Mike was a renowned pedal steel guitar player whose career saw him performing with Billy Martin, Wyatt Webb, the Louvin Brothers, more than 20 years with Barbara Mandrell, Connie Smith and most recently with Mandy Barnett. Along his career, Mike played with numerous other musicians and performers. He served as Vice President and later President of the Nashville Steel Guitar Association for several terms. Mike was also an avid reader and was interested in historical reading and reenactments. He loved animals and enjoyed living on the farm and caring for his many farm animals which were all named by Mike. Other interests he maintained were old comedy movies, all the newer action movies, Disney, Star Trek, Star Wars and most anything in the genre of science fiction. Although best known as an accomplished and extremely talented pedal steel guitarist, Mike was known to be quite competitive by nature. He “hated to loose” at chess or card games and if you should beat him; he would not oppose you again. Mike also loved to travel and enjoyed visiting various places around the globe. Mike leaves to cherish his memory, his wife, Claudette Jones; two sisters, Darla Schnabel and her husband Keith; their son (his nephew) Adam Schnabel; and Carla Murphy and her husband Wade; their children; nephews, Kenny Murphy and Teddy Murphy; and nieces, Anna Murphy and Maryruth Murphy; his uncle and aunt, Fritz and Dorothy Werner; his aunt, Esther Hastings and several cousins. Public visitation and memorial gatherings will be held Sunday from 4-8 pm and Monday from 4-8 pm at Cole & Garrett Funeral Home, 127 N. Main Street, Goodlettsville. A private family service will be held at another time. Floral tributes are welcome as well as memorial contributions to Alive Hospice or the Freedom Farm of Hendersonville.