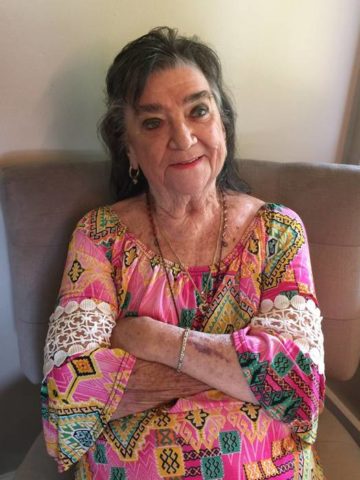 Born in Goodlettsville, Tennessee on April 2, 1933

Departed on August 24, 2016 and resided in Springfield, Tennessee

Maxine Smiley Fields, age 83 of Springfield, passed away on August 24, 2016 with her children by her side.
Mrs. Fields was born on April 2, 1933 to the late Mitchem and Ester Smiley in Goodlettsville, TN in a small cooper shack. Being raised on the family farm with her six siblings she shared in the responsibilities of raising the smaller children and also working the farm. Maxine met the man of her dream Jack Gordon Fields at the age of 17 in Louisville, KY. They fell in love and got married on May 2, 1951.
Jack being enlisted in the Army, they traveled the world and raised five children. After Jacks retirement, they settled in Columbus, Ohio, where Maxine was able to continue her career in the restaurant industry managing several up scaled restaurants. Maxine overcame so many hardships including the death of her two oldest daughters, Patricia and Jackie Lynn to cancer.
Some of the children’s fondest memories were the way Mom could make a gourmet experience out of the trunk of Dads Cadillac. The same feeling when they would open their field trip lunch bags and suddenly were the envy of their school mates, from Vienna sausages to Beef Wellington to bologna spread, Mom was amazing.
Another one of the things the children admired about their mother was her kind heart to less fortunate people. One such instant was when they were traveling to Florida in the winter they stopped at a little town in Georgia for dinner. While having dinner, Mom noticed an elderly gentleman across the table from them, who seemed to be down, and struck up a conversation. She learned that the man had no coat for winter, so she returned to their table discussed it with Dad, and returned to the man and gave him Dads overcoat.
These are just a few reasons that Maxine’s children are so proud to have her as their mother. Maxine will always be remembering as a hard worker, loving and devoted wife, mother and grandmother.
In addition to her parents, Mrs. Maxine is preceded in death by her beloved husband of 65 years Jack Gordon Fields, Sr.; two daughters, Jacky Lynn Fields and Patricia Louise Carnes, 1 brother and 3 sisters.
She is survived by children, Jack Gordon (Benita) Fields, Jr., Teresa A. Fields, and David Presley (Tonia) Fields; and three grandchildren, Nicholas Adam Fields, Jessica Lynn (Josh) Maggart, and Emilee Rayne Fields and sister, Betty Joyce (Mike) Karnes.
A Life Celebration will be held on Friday, August 26th at 2pm in the Chapel of Cole & Garrett Funeral Home in Goodlettsville. The family will receive friends on Friday from 11am until the time of service. Memorial Donations can be made to Alive Hospice 1718 Patterson St. Nashville, TN 37203.
Cole & Garrett Funeral Home 127 N. Main Street Goodlettsville, Tennessee 37072 615-859-5231