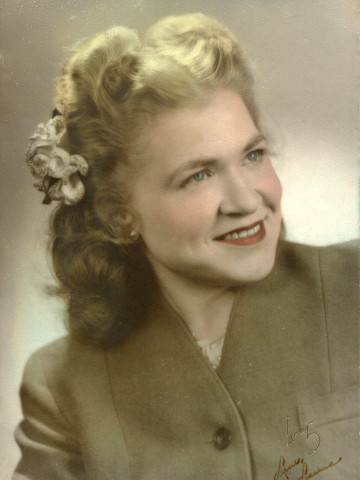 Departed on January 18, 2016 and resided in Goodlettsville, TN

Mary Lorena Roberts of Goodlettsville, Tennessee entered heaven’s gates on January 18, 2016. She reunites there with her devoted husband Walter Newt Roberts, Jr., her beloved parents Joel and Floy Booth Lawrence, her sister Irene (Ottis) Busby, her brothers James Lawrence and Tommy Lawrence, and her brothers-in-law James Jones, Horace Davidson and Sammie Roberts.  Most wonderful of all she is now in the presence of Jehovah God and her Savior Jesus Christ.

A celebration of her life will begin with a gathering of family and friends from 1:00-2:30 P.M. at Cole and Garrett Funeral Home, Goodlettsville, Tennessee, on Sunday, January 24, 2016 with a service to be held at 2:30 Sunday in the Cole& Garrett Chapel. Burial will be at Spring Hill Cemetery, Nashville, Tennessee on Monday, January 25th at 2:00 P.M.  On Sunday evening, January 24 there will also be a memorial gathering of friends and family at 5:00 P.M. at Collinsville Baptist Church, Collinsville, Alabama.

The family would like to express thanks to all who have been a part of the life of Mary Lorena Roberts and invite you to join us in the celebration of her 96 years of God’s faithfulness and her graduation to her eternal Home.