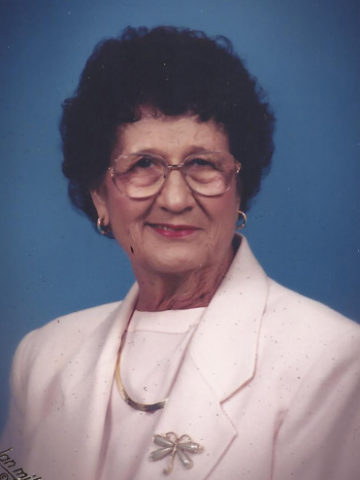 Departed on December 31, 2017 and resided in Goodlettsville, TN

Mary B. Elmore, formerly of South Pittsburg, TN, passed away December 31, 2017 at the age of 91. Born to the late Henry and Wynona Byrd on March 27, 1926. She was also preceded in death by her husband, Dr. Horace L. Elmore, her daughter, Janice D. Elmore, and all of her brothers and sisters. Survived by her son, Levoy (Tina) Elmore; daughters, Lauria E. (Bill) Merritt, and Jill Winfrey; grandchildren, Morgan Elmore, Bryant Elmore, Will Merritt, Matthew Merritt, Breanna Elmore. She was also survived by numerous nieces, nephews and extended family, along with her special friends from Brookdale Assisted Living in Hendersonville, TN, and the Glass family in Linden, AL. Mrs. Elmore was a graduate of Ole Miss, and taught school for many years. After her husband opened his medical clinic in Bridgeport, AL, she was instrumental in the daily operation, as both nurse and office manager. She was active in the choir at First Baptist Church in South Pittsburg, and when she moved to Goodlettsville, TN, became a member of Metro Baptist Church. Visitation will be at Cole & Garrett Funeral Home, Goodlettsville Thursday January 4, from 10 am until 2pm. Visitation on Friday will be at Rodger’s Funeral Home, 400 Laurel Ave., South Pittsburg, TN from 4-8 pm, where funeral service will be on Saturday January 6 at 2pm with interment to follow at Sequatchie Valley Memorial Gardens. The family would like to say a special thank you to the staff at Brookdale Assisted Living in Hendersonville for all the love and care they gave to Mrs. Elmore.

3 Comments to Mary B. Elmore