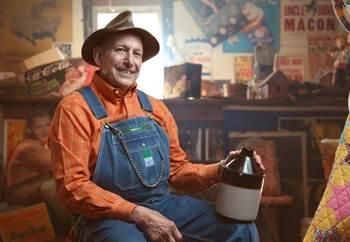 Departed on May 2, 2014 and resided in Goodlettsville, TN

Nashville, TN --- "Lonesome" Lester Armistead, 71, founding member of The Tennessee Mafia Jug Band, has died after a battle with cancer.

With the jug band, Armistead propelled both the comedy and the old-time music with his percussive jug blowing. His powerful tenor singing recalled the late great Bashful Brother Oswald, (comedian and Roy Acuff's longtime dobro player), from whom Lester learned to sing. Lester proudly played an antique jug owned by his mentor, and Lester himself an accomplished musician. The band has performed worldwide including performances on the Grand Ole Opry and as regular guests on the Marty Stuart Show on RFD-TV.

Armistead and his late brother, Jack, performed extensively as a country duet many years ago. The boys grew up around Roy Acuff's Smoky Mountain Boys, as their dad co-owned a bait store with Howdy Forrester, who played fiddle with Acuff.

A Tennessee native and retired printer, Lester lived on a farm in the Luton Community near Goodlettsville. On the property stands an old country store which has been the site of many musical gatherings; a place where some of the biggest names would gather for a comfortable, low-key jam, good food and conversation.

"There will never be another man who'll measure up to my dad. He was an honest, hard-working farmer and humanitarian who loved to dance and play music. Most of all, he loved his friends and family and especially enjoyed being a grandfather. He was overall just the nicest person you'd ever meet and now, his journey is over. Our family and the extended jug band family is grateful for the prayers and support of so many."