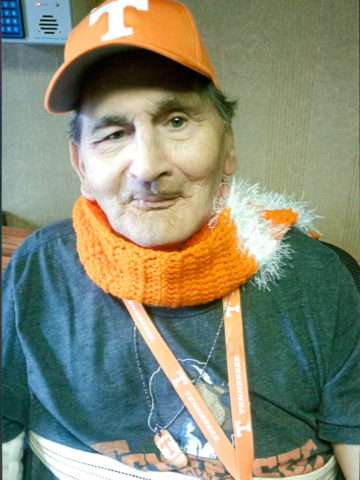 Born in Millersville, Tennessee on December 12, 1940

Departed on May 25, 2016 and resided in Murfreesboro, Tennessee

Kenneth R. Patrick, age 75 of Murfreesboro and formally of Goodlettsville, passed away on Wednesday, May 25, 2016 at St Thomas Rutherford Hospital.
He was born on December 12, 1940 to the late Charles J. and Ruby Patrick in Millersville, TN.
Mr. Patrick was known to his grandchild as “Superman”, he was the most helpful, loving and faithful person they knew. He was also known to many as “Pop” or the “NHC Greeter”.
When talking with his family he would go out of his way to make sure they had what they needed and most of the time what they wanted. It didn’t matter if it was his wife Anna, waking him up at 2:00am in the morning wanted to take a ride in the car when he had to be up at 5:00am to go to work or the kids a coke when money was tight; he found a way to make it happen. They even remembered a time that he pulled his wife across the Old Hickory Lake in a raft because she couldn’t swim but wanted to be right in the middle of all the kids and family.
He would perform tricks for the children and grandchildren just to bring a smile to their face. He even made his wife and Patricia spoon rings, just because. He was an awesome father. He loved unconditional and was always willing to help even if the car broke down on the way, he was there when you needed him.
Even after his accident he still remained a joyous and giving man, every year at Christmas he would pay for dinner for all the nurses that worked, just to show how much he appreciated their hard work and commitment.
He will forever be the greatest son, husband, father, grandfather, great-grandfather and friend to so many.
In addition to his parents, Mr. Patrick is preceded in death by his beloved wife, Anna Marie Patrick and granddaughter, Leonna Harville.
He is survived by children, Patricia (Tom) Rote, Ray Patrick, Kenneth Ray (Ramona) Harville, Charles Edward Harville, James Harville and Robert Harville, 13 grandchildren and numerous great grandchildren.
A Life Celebration will be held on Friday at 12pm in the Cole & Garrett Chapel with burial at Forest Lawn. Visitation with the family will be on Thursday, from 4-8pm then again on Friday from 10am until the time of service.
The Family would like to give a special Thank You to all the nurses, doctors and physical therapy team at NHC in Murfreesboro for their dedication to his care over the last 12 years.