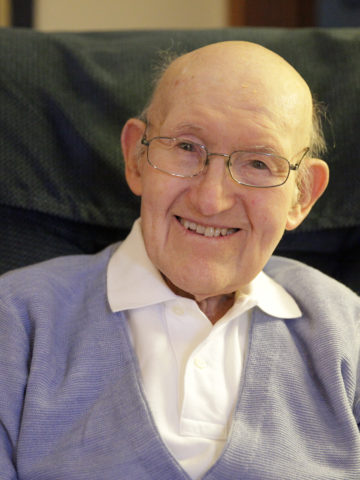 Departed on May 26, 2016 and resided in Hendersonville, TN

Durbon was a man who loved and was devoted to his family as a young boy and also as an adult.   He put his family first and spent his personal time involved with his wife and children. His love of extended family was evidenced by attending immediate family reunions and National Crain reunions.

Durbon and his wife, Mary, shared a hobby of genealogy research of the families Crain, Keel, Carson and McKee.  They published 4 books on these families which are on file at TN State and local County Archives.

His love of music led him to take ukulele  and Hawaiian guitar lessons as a young man and he played with the Amoa Islanders band.

He worked for Nashville Dental Inc. as the tooth department manager for over 51 years.

He served his country in World War II as a Private First Class with Company F, 359th Infantry Regiment and the 90th. Infantry Division of General George S. Patton’s Third Army.  He participated in four major battle campaigns of northern France, Ardennes, Rhineland and Central Europe during 1944 and 1945.

Remains rest at Cole & Garrett Funeral Home, Goodlettsville. Visitation 4-8 PM Sun May 29; Celebration of Life service will be led by  Sellers S. Crain, Jr. Mon May 30 at 10:00 preceded by 1 hour visitation. Interment at Bethlehem Cemetery in Lebanon, TN at 2:00.