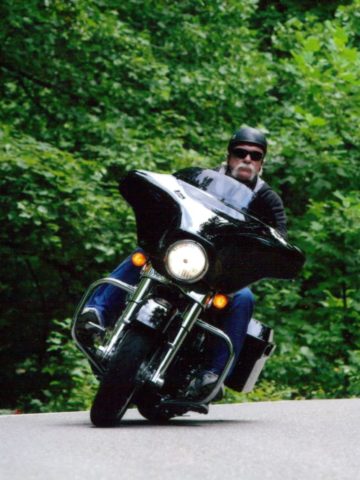 James Michael Sweeney, 67, passed away unexpectedly at his home Wednesday, April 10, 2019. Born October 2, 1951 in Detroit, MI he was the son of the late James Edward “Rooster: Sweeney and Maxine Binkley Sweeney. Mike lived in Dumas, TX, Memphis, TN and settling in Ridgetop. For a brief time after coming to Ridgetop he lived and worked in Cartersville, GA. He worked as a truck driver all of his working life, and had worked for Yellow Freight, Yellow Freight Roadway and Sadler Trucking among others. He also owned and operated his own Peterbilt for many years and used the CB handle “Flying Hot Dog” which stuck with him as a nick name.He was a true outdoorsman who enjoyed camping, hunting, fishing and ATVs. Earlier in his life he also had a keen interest in quarter horses. One of his constant passions was motorcycles. He was a Harley man and owned a 1966 Shovel Head as well as a late model Street Glide. His love of motorcycling was something he shared with his children, in fact, he bought Harley Davidson Fat Boy models for his son and daughter. Mike leaves his wife Shirley Quinn Sweeney; his children, Vicky Carol, Mary Jenelle Bush and Jason W. Bush; his grandchildren, Katelyn Bush, Devin Bush, Caleb Bush, Coretta Bush and Kamaron Bush; and his brothers, Kevin Sweeney and Darrell Sweeney, as well as extended family and numerous friends. A gathering and celebration of his life will be held at Cole & Garrett Funeral Home, Goodlettsville on Monday from 3:30 to 6:30 PM. There will be no other services.