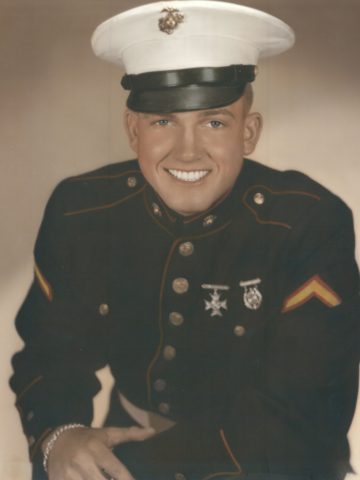 Departed on October 21, 2020 and resided in Goodlettsville, TN

James Martin Allen, 90, of Goodlettsville, passed away Wednesday, October 21, 2020. Born March 20, 1930 in Old Hickory, TN, he was the son of the late William R. Allen and Mona A. Martin Allen. Martin was also preceded in death by his wife of nearly 30 years, Melba J. (Byram) Allen; and two daughters, Lee Ann Carlton and Tina Polson. Martin graduated from Dupont High School where he had excelled in sports. He had been Captain of his Football and Baseball teams and had also been a Nashville Golden Gloves Champion. Following graduation from high school, Martin joined the United States Marine Corps and served in Korea during the Korean War. Martin worked briefly at Dupont after returning from the Marines and was retired from the former Ford Glass where he worked in plant security. After retiring he enjoyed going to help his wife, Melba, at her job as manager of a 7-11 store. He also enjoyed going to the VFW Club in Hendersonville where he often spent time just enjoying the company of other veterans and drinking coffee. He had been a resident of Grace Manor which he loved. Martin is survived by daughters, Debbie (Hollis) Malone, Marta Allen, Chelli Allen, Lynn Marlow, Ruth Ann Marlow and Lorraine (Tony) Stella; a sister, Jean Judd; and numerous grandchildren, great-grandchildren and extended family members. A graveside service with military honors will be held at 12 noon Wednesday, October 28, 2020 at Spring Hill Cemetery with Kyle Malone, Patrick Malone, Chad Malone, Eric Carlton, Jake Malkiewicz and John Demonbreun acting as pallbearers. Arrangements have been entrusted to Cole & Garrett Funeral Home, Goodlettsville, TN.