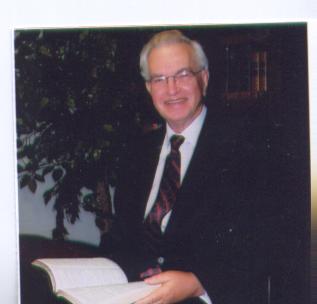 Departed on February 4, 2007 and resided in Hendersonville, TN

Age 74, He was married to Janette L. Jackson of Huttig, Arkansas on June 26, 1954. To this union was born two children: Mrs. Darla Hughes of Murfreesboro and Jana Jackson of Brentwood. He was fondly known as Brother J. Chief and Papa. Rev. Jackson responded to the call to preach at the age of 19 and continued to faithfully proclaim the message of salvation as long as his physical strength would permit. In addition to his immediate family and near relatives, he leaves a host of friends who will miss the warmth of his friendship. His first pastorate was New Hope Assembly Of God in Monticello, Arkansas, with his wife Janet at his side. After pastoring a short time, they went on the evangelistic field, preaching wherever the doors opened. In 1959 he accepted the pastorate of First Assembly Of God in Milan, Tennessee, where he stayed until accepting a position of leadership with the Tennessee District of the Assemblies of God as District Youth and Christian Education Director/Secretary-Treasurer. While continuing as Secretary-treasurer for the District, he had a vision for a church in Hendersonville, which he pioneered in 1968. His ministry at the Hendersonville Assembly of God extended far beyond the walls of his church. He became recognized in the greater Nashville area due to his late-night TV program, "The New Life Hour," and a daily radio broadcast, "Christ Is the Answer." In 1977 he was elected as Tennessee District Superintendent of the Assemblies of God, where his passion and vision to win the lost was ignited in the hearts of many ministers across the state. While serving as District Superintendent, he also served on various boards within his denomination, including Hillcrest Children's Home and Central Bible College in Springfield, Missouri. In 1998, the General Council of the Assemblies of God looked to this pastor with a heart for young preachers to serve as one of the Executive Presbyters of the organization. In 1983, he had a vision for Cornerstone Church and personally financed the church plant that is now flourishing and reaching multitudes with the Gospel. After retiring from his work with the Tennessee District, he became the pastor of Middle Tennessee Assembly in 2005, where he served until his death. He is survived by his wife of 52 years, Janet; two daughters and one son-in-law, Darla and Brian Hughes of Murfreesboro, and Jana Jackson of Brentwood; two grandchildren, Brianna and Brad Hughes; one brother, Jay Jackson and his wife Jean, and son, Jay D. Jackson. The family will receive friends from 2pm until 4pm and 6pm until 8pm, Thursday, February 8, and 2pm until 5pm, Friday, February 9, at the Cornerstone Church. Funeral service will be conducted 7pm, Friday, February 9, at the Cornerstone Church with Rev. Eddie Turner, Rev. Bobby Johnson and Rev. Don Brankel officiating. Active pallbearers are Randall McCarty, Ron Woods, Gary Green, Larry Vine, Barry Culberson and Todd Alexander. Honorary pallbearers are members of the Tennessee District Board of Assemblies of God. Entombment service will be 10am, Saturday, February 10, at Forest Lawn Cemetery. Memorial donations may be made to Camp Jackson, c/o Tennessee District, PO Box 358, Madison, TN 37115.
HENDERSONVILLE MEMORY GARDENS & FUNERAL HOME 353 JOHNNY CASH PARKWAY; HENDERSONVILLE, TN. 37075 615 824-3855 www.harpethhills.com