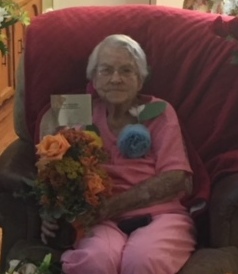 Departed on March 1, 2018 and resided in Goodlettsville, TN

Helen Elizabeth Lee, 101, of Goodlettsville passed away Thursday March 1st., 2018. Helen was born in Millersville on August 26, 1916 to the late Thomas and Mattie L. (Dardner) Franklin. She was raised and educated in Millersville and Goodlettsville where she joined the Union Hill Baptist Church as a teen. She recalled being baptized in Whites Creek. She remained a faithful and tithing member the remainder of her life. She taught Sunday school until she was in her 90’s. For many years, Helen drove a special education bus for Metro for many years as well, retiring at the age of 70. She also worked as a private duty sitter on weekends. Helen truly enjoyed life and living. One of her favorite things was her love of chocolate. She also loved to sew and quilted until she was over 100. She and her son and daughters travelled all over the United States only missing out on seeing Alaska. They also travelled in Europe. A proud and devoted wife, mother, grandmother and great-grandmother, she not only raised her six children, but also two of her grandchildren. Helen was preceded in death by her husband, Robert G. Lee in 1969; a daughter, Georgia Lee Kessler; a son, John Thomas Lee; and a grandson, Joseph Timothy Hindsley. She is survived by four children, Charlotte Lee Wheeler, Shirley Lee Hindsley, Robert Eugene “Bubby” Lee (Paula) and Susie Lee Yambrick (Michael); 11 grandchildren; 22 great-grandchildren; and 16 great-great-grandchildren. Visitation for Helen will be Friday, March 2nd. From 3 – 8 PM at Cole and Garrett Funeral Home, White House. A Life Celebration Service will be held Saturday at 2 PM at the Union Hill Baptist Church, Goodlettsville with interment in Union Hill Cemetery.