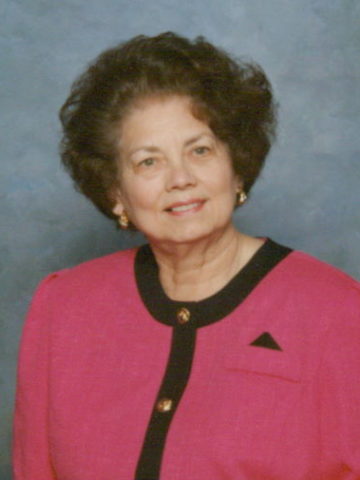 Departed on August 1, 2019 and resided in Goodlettsville, TN

She was born on October 19, 1927 to the late Jere and Geneva Sparkman in Doyle, Tennessee. She was the third in the line of five children born to Jere and Geneva with names beginning with H. They were Helen, Horace, Hazel, Hubert and Harold. She grew up on a farm and although it was during the Great Depression, they had everything they needed. She attended White County High School in Sparta, where she played basketball. It wasn’t long before she met that good-looking, brown eyed boy and fell in love.

In 1945 the war was over but work was still scarce and so Comer went to Detroit to acquire a job at Packard Motor Company. She hopped a bus and followed him there, where they married in a tiny ceremony with a dress her mother sent through the mail. They set up residence in a small upstairs apartment and would welcome their first son, Ray in July of 1946. Soon after they returned to Sparta and would welcome Steven Allan in June of 1948. They eventually moved to East Nashville, this is where they would raise their two boys and watch them grow. When Ray and Steven became old enough, they joined the Cub Scouts and Hazel became the troop leader. Later in the 60’s Mrs. Eller started a job a Wynn and Graff Upholstery as a bookkeeper and stayed there for 30 years.

Mrs. Eller enjoyed cooking and entertaining her family. She felt the most joy when she became a Granny of three precious babies. They enjoyed sleepovers in “granny’s room”, picnics, board games, camping trips and their annual trip to Cumberland Mtns. State Park. Mrs. Eller was always the happiest in the mountains in the fall, celebrating her birthday. There were times that Mrs. Eller would bring her sweet BeeGee to the Mountains with her. She even ventured to take her along to Dollywood and the hotel by placing her in a large bad and telling her to “stay quiet.” After her passing, another Bichon came along and Melody stole her heart. Melody’s companionship extended to Brookdale after Mrs. Eller had to move, thanks to her son, Steve and daughter-in-law, Linda. They would deliver her after lunch and would pick her up just before supper. These visits meant to world to Mrs. Eller.

After the passing of her husband in 1991, Mrs. Eller joining the Skyline Auxiliary. She found great comfort dedicating her time to help others. She soon became President of the Auxiliary for Volunteers and when the hospital closed and moved to the new Skyline Medical Center. She represented the group well as they made the transition and she earned several awards. She busied herself with a Christian Woman’s Club and various activities. She was a member of the Goodlettsville Church of Christ.

In addition to her parents, Mrs. Eller is preceded in death by her husband, Comer Ray Eller, Sr; one sister and three brothers.

A Life Celebration will be held on Wed. Aug.7th at 2pm in the Chapel of Cole & Garrett Funeral Home, burial will follow at Spring Hill Cemetery. The family will receive friends on Wed. from 11am until the time of service.

The family request in lieu of flowers to please make donations to the Alzheimer’s Association.