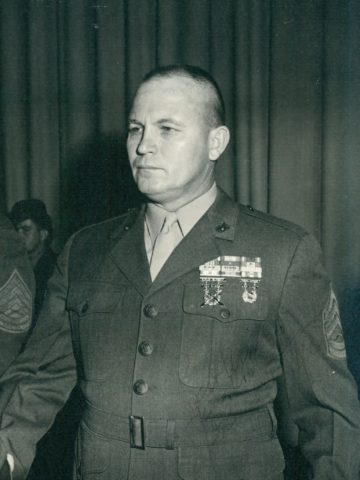 Harold Loyd Groves, 86, died Monday, June 17, 2019 at his daughter’s home in Gallatin. Born October 9, 1932 in Robertson County, TN, Harold was the son of the late Levi Bethel Groves and Gracie Bell (Hester) Groves. He was also preceded in death by his first wife, Margie (Nunley) Groves; a son, Donald; his second wife, Mary (Bryant) Groves; and a brother, Charles R. Groves. Harold was a retired Marine, having served 20 years in the USMC and retiring at the rank of Gunny Sergeant. He served in both the Korean and Vietnam Wars and was a purple heart recipient. After retiring from the Marine Corps, Harold worked for the US Postal Service. He had also worked as a crossing guard for Hendersonville High School. Harold had a deep sense of patriotism and respected any uniform, whether military or public service. His family thought of him as loving, courageous, strong and honorable. He was also a fan of Nascar and the Atlanta Braves baseball franchise. He is survived by his children, David D. Groves, Deborah D. Whitson, and Donna D. (Mike) Shepherd; 6 grandchildren; 7 great-grandchildren; as well as extended family members and friends. Visitation for Harold will be held at Cole & Garrett Funeral Home, Goodlettsville, TN, Wednesday from 5 – 8:30 PM and Thursday from 11 Am – 12 noon. A celebration of life service will be held Thursday at noon followed by burial with military honors at the Middle Tennessee Veterans Cemetery in Pegram.