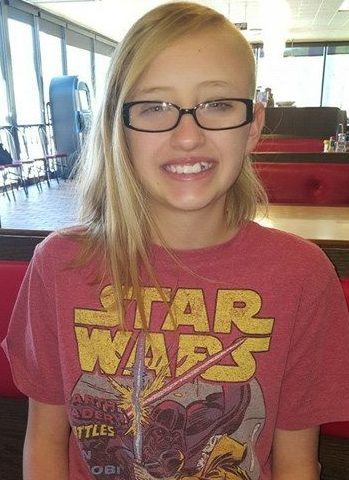 Departed on February 16, 2018 and resided in White House, Tennessee

Greycin Elaine Oaks age 12 of White House went into the arms of God to join her heavenly family on February 16, 2018 surrounded by her loved ones.
The youngest of three children to Ben and Traci Oaks, Greycin was born on May 2, 2005 in Nashville and was the first granddaughter on her father’s side. She has two older brothers, Bishop and Kolvin, and the three of them were inseparable from the beginning.
The Oaks family has many special traditions. One fun example is the “7:52 shout out”. If the family is at home at 7:52 (am or pm) an alarm goes off and everyone screams “7:52”. If Ben or Traci are not at home, often they will make a phone call just to say “7:52” and “I Love You”. When they were small, another tradition was at bedtime. Traci would read “Goodnight Gorilla” and Ben would read “Where the Wild Thing Are”. As the children got older they would act out the different parts of each story. It was Ben and Traci’s goal that their children were not just close siblings, but best friends.
Greycin was described as independent, unique, outgoing, and FABULOUS. She had a heart of gold and her special gift was to bring out the best in people. She attended White House Middle School and there met Wednesday, who was her “ sister from another mister” and very best friend.
Greycin loved all of her little cousins and she had a very special relationship with each of them. She especially loved helping through the baby phase. Her smile would just beam! Her bedroom door is covered with their baby pictures. Greycin loved animals, and like all the “Oaks Girls” she especially liked cats. Greycin’s plans were to renovate her parents’ basement so she could live there with all of the cats she wanted and become a “Crazy Cat Lady”.
Summers were spent at “Camp Gran”, or “Gran Camp” as she called it, making crafts together with her cousins. She also enjoyed having her uncle Travis teach her about Anime and how to draw the characters. Birthdays were spent at the house eating her mommy’s meatloaf, mac’n cheese, and broccoli (which was her favorite), and then curling up on the couch to watch a movie with the whole family. Christmas was split between her house and Gran and Pop’s. One Christmas, she was the last to finish opening gifts because she wanted to put on each new outfit.
Greycin loved the outdoors. Her parents have great memories of watching her jump on the trampoline in the backyard (in the sunshine or rain), riding her scooter (even when her legs got too long), playing with the dogs and cats, and running up the water bill as she and her brothers made a “slip n’ slide” in the front yard with a tarp, soap, and paint. Several summers ago, she played in a soccer league that her dad helped coach. She was her Daddy’s “MVP”, which he attributed to her 3 to 1 stride which kept her in front of most of the kids, even the boys.
Greycin was quick witted and the life of the party. She enjoyed watching L.A. Beast on YouTube and some of her favorite musicians were Twenty One Pilots, Night Core, and Passenger. It was her goal to make everyone laugh or at least smile, even if that meant walking down the aisle at Walmart while her mom grocery shopped, wearing a ladybug, giraffe, or unicorn onesie.
Greycin will forever be remembered as a perfect daughter, loving sister, granddaughter, best friend, niece, and cousin.
She was welcomed into Heaven by her maternal grandmother, Charlotte Evitts; uncle, Richard Evitts Sr; and great-uncle Harold.
She is survived by her parents; Ben and Traci Oaks; brothers, Bishop and Kolvin Oaks; paternal grandparents, Don and Jacqueline Davers Oaks; maternal grandfather, Aaron Evitts; aunts, Elizabeth (Charles) Cook, Amy (Carlos) Oaks-Smith, and Sharon (Hollis) Troutt; uncles, Nathan (Mandy) Oaks, Travis Oaks, and Chris (Missy) Evitts; cousins, Duncan, Laura, Leighton, Rylee, Grace, Josiyah, Izayah, Ezekeyel, Richard Jr., Daniel, Mickey, Josh, Jonathan, and Alex; her best friend Wednesday Barche, a gaggle of friends and a large extended family that love her dearly.
A Life Celebration will be held on February 20th at 12 noon in the Chapel of Cole & Garrett Funeral Home in White House, TN with Nathan Oaks officiating. Burial will follow at White House Memorial Gardens with Ben Oaks, Bishop Oaks, Kolvin Oaks, Nathan Oaks, Travis Oaks, Carlos Smith, Charles Cook and Chris Evitts serving as pallbearers. The family will receive friends on Monday, February 19th from 3:00pm to 8:00pm and on Tuesday, February 20th from 10:00am until the time of service.
The family request that donations be made in memory of Greycin to the Freedom Farm Animal Sanctuary. Donations can be made online at http://freedomfarm.net.