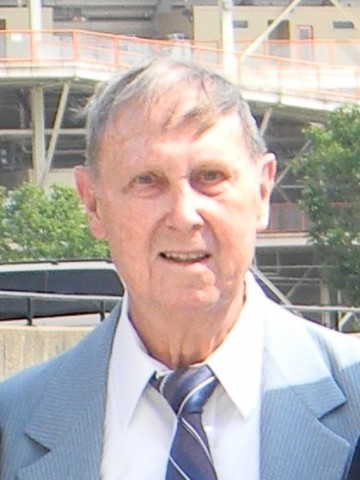 MCFARLAND, George H. --- Age 87, of Nashville, Tennessee, died peacefully on March 22, 2013, returning to his Lord and his beloved wife of 60 years, Gwen. George is survived by his son, Anthony J. McFarland (Mary Jane) of Goodlettsville, TN, three grandchildren, Matthew of Nashville, TN, Pat and Thomas, both of Goodlettsville, TN; daughter, Joni E. Baker, of Navasota, TX; and sister, Betty Jordan of Elkton, TN. George was preceded in death by his wife, Gwendolyn E.N. McFarland, his parents, Henry Robert McFarland and Addye Gowan McFarland, his sisters, Ruby Lanier, Bessie Whitt of Ardmore, AL, Mamie Sue Richards of Houston, TX, and Lucille Jones, and his brothers, Robert (Bud) McFarland of Elkton, TN, Dr. John McFarland of Greencastle, IN, and Harold (Red) McFarland of Pulaski, TN. George was born in Ardmore, Tennessee in 1925, graduated Elkton High School in 1943, then attended and graduated from Martin Junior College and the George Peabody College for Teachers with a Bachelor of Arts and a Masters degree. He served in the United States Army European Theater of Operations from 1943 through 1946, when he was honorably discharged. George was a physical education teacher in the Metro Davidson County Schools for 35 years until his retirement in 1985. "Coach Mac" was the track coach at Isaac Litton Junior High School, a former Director of Sevier Park, and a long-time Camp Director at Oak Hill Day Camp. George was a former member of the Inglewood Civitan Club, and a life member of American Legion Post #82. George spent his entire life actively involved in politics, serving on the Davidson County Democratic Executive Committee, the Tennessee State Democratic Executive Committee, and a delegate or alternate delegate to several National Democratic Conventions. George was a committed member of St. James the Less Episcopal Church in Madison, Tennessee, where he served for many years as Head Usher. George will be deeply missed by all whose lives he touched. Both visitation with the family and the memorial service will take place at St. James the Less Episcopal Church, 411 Due West Avenue, Madison, Tennessee 37115 on Monday, March 25, 2013. Visitation will be held from 12:00 p.m. to 1:00 p.m., and from 2:00 p.m. until 3:00 p.m. The memorial service will be held from 1:00 p.m. until 2:00 p.m. with the Reverend Robin Courtney officiating. Donations in lieu of flowers may be sent to St. James the Less Episcopal Church (615) 865-4496.