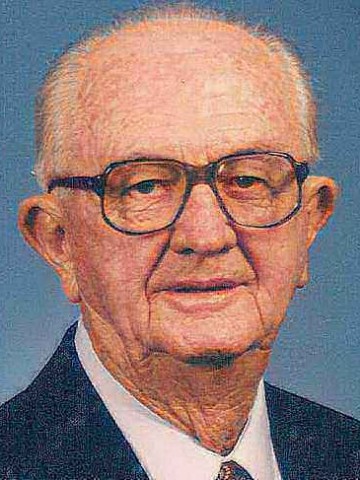 Departed on September 1, 2012 and resided in Hendersonville, TN

FREELAND, GOLDMAN DEWITT – Age 94 of Hendersonville, Tennessee. Passed away peacefully surrounded by his family on September 1, 2012. Goldman, one of eight children was born to Harris and Cassie Freeland on May 16, 1918, in Oak Grove, Tennessee near Portland. He was married to Sarah Clay Freeland for 71 years, during which they enjoyed golfing with friends, square dancing, clogging and traveling with friends and family. He was also an avid UT fan of football, basketball, and Lady Vols basketball. Goldman worked for E.I.Dupont for 45 years in Old Hickory, Tennessee; Chattanooga, Tennessee; Camden, South Carolina and retired from the Old Hickory plant in 1981. Goldman and Sarah were involved in five churches in two states, becoming active in church work and Sunday Schools, the latest being the Followers Class of Hendersonville First United Methodist Church. Goldman was preceded in death by his wife, Sarah Clay Freeland, and is survived by his three daughters and sons-in-law, Sandra and Richard Kuhn of Memphis, TN, Sheila and Crawford Harris, and Debby and Terry Dykeman of Hendersonville, TN; nine grandchildren and 14 great-grandchildren. Services will be held at the Hendersonville Memory Gardens and Funeral Home on September 4 at 1PM. Visitation will be September 3 from 4-7PM and September 4 from 12 to 1PM. In lieu of flowers, the family requests that donations be made to Children First, The Followers Sunday School Class of First United Methodist Church of Hendersonville, and the Hearth at Hendersonville.