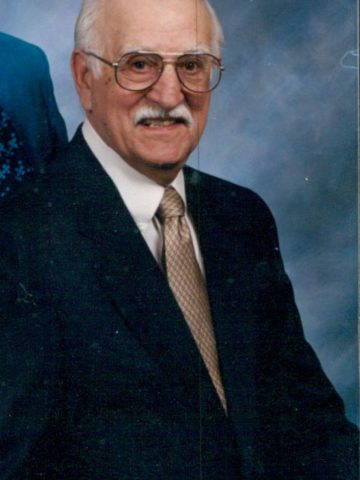 Mr. Francis Anthony Centimole “Frank” was born March 1, 1919 in Matawan, New Jersey. He was the son of Carmen and Mary Centimole. He died Saturday, May 20, 2017. He passed away peacefully at his daughter and son-in-laws home, Fran and Louie Roberts.
He was preceded in death by his wife (December 30, 2011) Margaret Centimole.
Those left to cherish his memories are his children, Frank Jr. (Nancy) of Bayonne, New Jersey, Steve (June) Centimole of Monteagle, Tennessee, Darrell (Christine) Thomas of Scottsville, Kentucky, Wanda (Bob) Cook of White House, Tennessee, Michael Centimole of Bowling Green, Kentucky, Rickey (Regina) Thomas of Jackson, Tennessee, Fran (Louie) Roberts of White House, Tennessee and Rita (Jim) Hobbs of White House, Tennessee. He is survived by one sister, Mary DeCarlo; he is survived by 19 grand children, Frank, III., Christine, Charlie, Brian, Kevin, Rob, Caleb, Alysha, Tina, David, Carrye, Zohn, Amber, Amy, Adam, Natalie, Samuel, Luke and Leah; also survived be 21 great grand children.
Frank was an active member of The Church at Grace Park and his Sunday School Class “Friends Class”. He retired from DuPont where he worked as an electrician. Frank was a World War II veteran serving his country as a sergeant in the United States Army. He served many years for the Robertson County Election office working the voting booth. He loved traveling – especially out west at Yellow Stone National Park; Frank loved the outside, he enjoyed raising beautiful flowers and kept his yard immaculate. Flowers were not all he raised, he enjoyed having a garden every year and sharing with family and friends. One of his greatest loves was having a unique relationship with each of his grandchildren. Being part of the greatest generation, he showed a remarkable work ethic and strength. He approached life with a “can do” spirit. Frank Centimole was never hesitant to lend a helping hand.
A Celebration of Frank’s Life will be held 10:30 a.m. Monday, May 29, 2017 at The Church at Grace Park chapel with Pastor Bob Cook officiating. Visitation at the church will be one hour prior to his service.
In lieu of flowers, memorial contributions may be made to the Building Fund at The Church at Grace Park.
Arrangements entrusted to Cole & Garrett Funeral Home, 212 Hwy 76, White House, Tennessee 615-672-3936