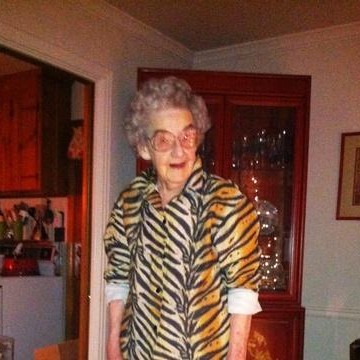 FARLESS, Margaret "Pudin" McAlister- Age 91 passed away on May 11, 2012. She was born on March 24, 1921. She was preceded in death by parents, Susanna Lyell McAlister and Joseph Eugene McAlister; husband, Thomas Lee Farless, and beloved pets, Penny and Casey. Margaret was the youngest of 12 children, 10 survived to adulthood, and the last of this generation. Preceded in death by sisters, Mary Gwendolyn and Mary Pearl McAlister, Eula Mai Eldridge, Annie Lee Mitchell, Nettie Cleo "Pat" Jaynes, and Ethel Gertrude Sholey; brothers, George Robert, James "Skinny" Lyell, Joseph "Joe" Larkin, Jerold "Spider" Eugene, and Horace Clifton McAlister. Margaret was born and raised in Dickson County and lived in Nashville before moving to Memphis where she retired from the Memphis Army Depot in 1981. Following the death of her husband, she moved back to Nashville. She was a member of Charlotte Avenue Church of Christ, and most recently attended West Nashville Heights Church of Christ. She is survived by nieces, nephews, and numerous special friends. Services will be conducted by Daryl Blankenship on Monday, May 14, 2012 at 2 p.m. at Harpeth Hills Funeral Home Chapel with interment to follow at Harpeth Hills Memory Gardens. Family and friends will serve as pallbearers. Family will receive friends on Sunday, May 13, 2012 from 4 to 8 p.m. and on Monday, May 14, 2012 from 12:30 p.m. until service hour at HARPETH HILLS FUNERAL HOME 9090 Hwy. 100 Nashville, TN 615 646-9292 www.afamilylegacy.com