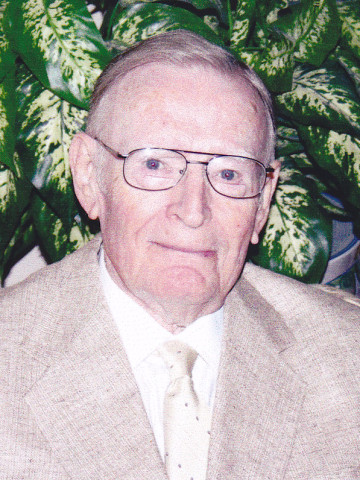 Departed on March 4, 2014 and resided in Nashville, TN

Ernest F. Aud, Sr. – passed away March 4, 2014, at 7:30pm, in Hendersonville, NC. He was preceded in death by in 2003 by his devoted wife of 62 years, Kathryn DeMatteo Aud. He is survived by his son, Ernest F. Aud, Jr. and his daughter in law, Melinda Aud; seven grandchildren, Christopher, Terrance, Andrea, and Danielle Aud, Bridget, Megan and Ross Kilroy; five great grandchildren, Amber Zook, Rachel, Emily, and Nathan Aud, and Grayson Kilroy; cousin, Edward P. Clark; nephews, Joseph DeMatteo, Dr. James Ferguson; nieces, June Lavender, Pam Linn, and Barbara Sullivan. He was born in Owensboro, KY, on August 20, 1916, the only child of Charles and Katurah Aud. He was a 1935 graduate of Father Ryan High School and believed to be the oldest surviving alumni. He was avid trumpet player and began playing at age thirteen. After graduating from high school, he played in the dance bands of Red McEwen and Owen Bradley. During the years of 1940 and 1041, he played in and conducted the CYO dance band. In 1941, he was drafted into the army, serving in field artillery training at Fort Bragg, NC. In 20 months, he was promoted to First Sgt. With 275 men under his command. He set an army record of 121 weeks without any of his men going AWOL. In 1944, Gen. George C. Marshall, Army Chief of Staff, held an inspection tour of Ft. Bragg and complimented him for having the top training unit. After four years of military service, he returned to Nashville and started a career as a salesman in the meat packing industry. In a few years, he was promoted to sales supervisor for Emge Packing Co. and moved with his wife to its headquarters location in Fort Branch, IN where he supervised 25 salesmen in four states.Upon retiring from Emge in 1967, he and his wife returned to Nashville and he began an accounting and tax practice. He also acquired securities and insurance licenses. In 1996, after many hours of practice, he resumed playing the trumpet and very much enjoyed playing for family and friends. By 2006, he had achieved a talent level sufficient for him to record two CD’s with some outstanding Nashville musicians. In 2010, he moved to Lake Pointe Landing in Hendersonville, NC to be near Ernie and Melinda, living in Landrum, SC, only 25 miles away. He very much enjoyed living in this retirement community and mad many new friends. He always kept them smiling with his frequent jokes. While frequently visiting with Ernie and Melinda, he charmed their friends and neighbors during and after dinner parties. He was renowned among his family and friends as a master of telling humorous stories. He was an avid golfer enjoying playing until age 96, particularly, with his son, Ernie. Ernest was an avid sports fan with strong allegiance to Vanderbilt and Notre Dame. His mind remained sharp with so many suggestions for the teams’ improvement that his nephew, Joe called him “Coach.” He was a much beloved father, father-in-law, grandfather, great grandfather, uncle, great uncle, cousin, and friend. His warm, charming and always upbeat persona will always be remembered. His very special devotion to the Blessed Mother over many years was remarkable. Active pallbearers: Hailey Curran, Jo DeMatteo, Jim Ferguson, Tim Lavendar, Kent Rae and Frank Sullivan. Honorary pallbearers: Charles Anderson, William Bagwell, David Balph, Edward Clark, James Crowley, William Fanning, Leon Harris, Edward Jenkins, Hardy Lavender, Jeffrey Lavender, David Palmer, Andy Reis, Mike Walker and Tom Walker. Visitation will be on Sunday, March 9 from 1:00-4:00 PM at West Harpeth Funeral Home, 6962 Charlotte Pike, Nashville. Funeral Mass will be Monday, March 10 at 10:00 at St. Ann Catholic Church, Father Philip Breen celebrating. Interment Follows at Calvary Cemetery. In lieu of flowers, the family requests contributions to Paralyzed Veterans of America. Thank you.