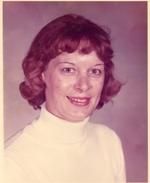 Departed on September 23, 2007 and resided in Goodlettsville, TN

She married Harold Hecklinger on April 7 1960. Being a naval wife, she resided in Virginia and Connecticut to begin a family. She raised her family in Toledo, Ohio only to move to Hopkinsville, Kentucky where her sons graduate form High School and College. Her life took her to Louisville, Mississippi where she was President of the Garden Club for many years. She was honored for her efforts for the many improvements she contributed to the community. Also, she was instrumental as President of the Republican Women of Winston County. Eventually she moved to Nashville, Tennessee to be closer to her children. Her life in Goodlettsville, Tennessee gave her grandchildren the opportunity to love her and admire her wisdom and values.

She was persistent on passing along her high morals and values to her children. However, it was her intelligence, generous heart, patience, understanding, compassion and courage she will always be remembered for.

Dorothy Hecklinger put her family first above herself and took pride in the achievements of her children. She was a woman of class and dignity which was noticed in her home and family. She believed in helping others, forgiving others and not passing judgment on others.

As a child, young girl, teenager, young women, sister, daughter, Wife, Mother, Grandmother, Dorothy Hecklinger was a women of presence and beauty. All of her teachings, All of her love, All of her influence, All of her will remain within all of us!

What would the world have been like without Dorothy Jean McGinnis Hecklinger in it? She Made a Difference!

You will always be with us! We will miss you and always LOVE YOU!