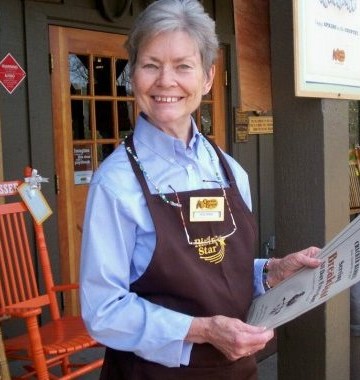 DONAHUE, Dolores- Age 78, Nashville, May 12, 2012. Dolores was born in St. Louis, MO, where she married Donald V. Donahue and they lived there until 1970. They moved to Columbia, MO and remained there until 1998. She worked for the MFA Credit Union and was Assistant to the President of Mizzou Credit Union from 1978 to 1998 when they moved to Nashville to be near her four grandchildren. She was an incredible grandmother and loved her grandchildren with all of her heart, and they cherished their "GrammaDee". Everyone she met loved her instantly; she was never without a smile. She spent many years scrapbooking and making homemade cards. In 2007 she started as a greeter at The Cracker Barrel on Charlotte Pike where she quickly gained the coveted "4 Star" status. She loved people and would often get cards from customers thanking her for saying or suggesting just the right gift. Preceded in death by her husband, Donald V. Donahue; sister, Carol Baker. Survived by children, Elaine M. Donahue, Beth Donahue-Weedman Robert and Don Donahue Laura Lyn; grandchildren, Donald "Baker", Cara Clare, John Brennan and Eliza Donahue; and brother, Robert Brady. She died at Alive Hospice on Saturday, May 12, 2012. The family requests in lieu of flowers, donations may be made in Dolores's name to Alive Hospice, 1718 Patterson St., Nashville, TN 37203. The family wishes to thank all those who cared for her there in her final weeks, the doctors and nurses at Vanderbilt and an extra special Thank You to Dr. John Mulder. A memorial service will be at 4pm on Wednesday, May 23, 2012 at The Pavilion at Harpeth Hills Funeral Home, 9090 Hwy 100, Nashville, 615 646-9292 www.afamilylegacy.com