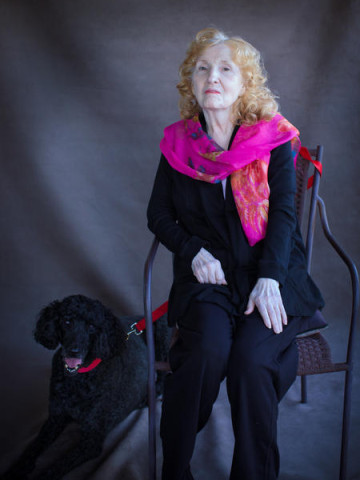 Departed on September 16, 2013 and resided in Nashville, TN

Songwriter/singer/recording artist Vikki Sallee Dillard has passed away in Nashville in the quiet presence of friends, relatives and loved ones.

Born Phyllis Jean Sallee, the daughter of John Sallee and Evelyn Rhodes Sallee on January 22, 1941, she grew up in Sallisaw, Oklahoma.
She began her music career as a teenager and adopted the stage name "Vikki" sometimes spelled "Vicki" Sallee at the suggestion of Wanda Jackson's father, Tom Jackson, who was her first manager.

Her early recordings were done in the historic Quonset Hut in Nashville for the ABC Dot and Reprise labels, with her song "Wild Angel" reaching #12 on the Billboard Hot 100 and #15 on the R&B chart in July 1964. The B side of that record "Jimmy Darling" also reached #4 on the British Charts for British band Madness that same year.

In 1980, a song she co wrote with her sister Bobbie Sallee and Gene Dunlap, "Sometimes I Go Crazy" was released by Loretta Lynn on her album "Lookin' Good".

Throughout her life she lived mostly in Nashville's Sylvan Park area, and was married to bluegrass Hall of Fame banjo player Doug Dillard. From their home she operated Hillbilly Hollywood Records, handling mail order CDs for herself and Mr. Dillard. Mr. Dillard passed away in May of 2012.
She is survived by her sister Bobbie Sallee Rivarde of Nashville; her daughters and their families; Kelley Jeanne Snead, her husband Doak, and their daughter Emma Claire of Thompsons Station, TN; Kristi Lea Ritson, her husband James, and their children, Rachel, Jennifer, and Morgan, of Peach Tree City, GA; and 3 nieces and nephews and 4 great nieces and nephews.

The family would like to offer our extreme gratitude to Hannah and Michael Jacques, Pastor and Mrs. Jimmy Hayes and the wonderful people at The River Church for their prayers, friendship and generosity during Vikki's illness.