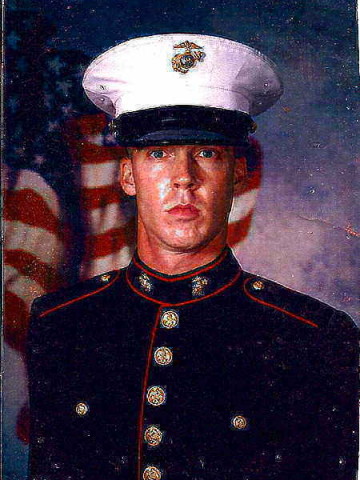 COLLIER, Bradley Aaron -, a proud and decorated veteran of the United States Marine Corps, died Wednesday, May 2, 2012, in Nashville following a traffic accident. He was 35. Collier graduated from Nashville's Hillwood High School in 1994 and subsequently attended Middle Tennessee State University, where he studied Criminal Justice. He joined the Marines at the outset of the invasion of Iraq and saw action there in the city of Ramadi. It was in the latter campaign that Collier was critically wounded by sniper fire and a rocket propelled grenade during a fire fight that lasted several hours. As a result of his bravery and injuries, he was awarded numerous honors including the Medal of Valor and the Purple Heart. Following his discharge from the Marines, Collier engaged in a variety of charitable activities, including speaking out for improved medical treatment of veterans and serving the homeless through the Room In The Inn program. Both in his work and recreation, he enjoyed the constant companionship of his faithful pit bull, Corporal. Collier is survived by his mother, Susan Collier, father, Rex Collier, older brother, Christian Collier, and stepmother, Malvina Collier, all of Nashville. Aunt & Uncle Nancy and Bill Lehner, Ohio and Aunt Sandra Schroeder Michigan, and Aunt Barbara Collier Indiana. He was preceded in death by his paternal grandparents, Charles and Velda Collier, and his maternal grandmother, Bettie Del Rios, and maternal grandfather Norman Schroeder. The Life Celebration service will be on Tuesday, May 8, 2012, at 11am, at the West Harpeth Funeral Home. Interment will follow in the Middle TN State Veterans Cemetery with military honors. In lieu of flowers, memorials are encouraged to www.woundedwarriors.org. Visitation with the family will be on Monday from 4-7pm, and on Tuesday from 10am until the service hour at West Harpeth Funeral Home. Following the burial, the family will have a reception at 2:30pm at the Brookmeade Congregational Church, 700 Bresslyn Road in West Meade. WEST HARPETH FUNERAL HOME, 6962 Charlotte Pike; online guestbook www.afamilylegacy.com 352-9400
.