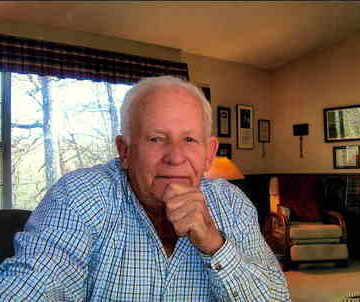 Bumgardner, William Allen "Bummy"- Age 91 of Gallatin went to be with the Lord on August 31, 2012. He was born February 6, 1921 in Wheeling, West Virginia to Mrs. Hilda Allen Bumgardner & John William Bumgardner. He was a graduate of Tridelphia High School in 1938. He attended West Virginia University graduating in 1942 with a B.S. in Chemical Engineering. During that time he spent one summer at Virginia Polytechnic Institute for additional education courses. He later became a Registered Professional Engineer and Metallurgist. Bummy served our country proudly in the Army during WWII where he was stationed in Alaska and Okinawa. During his time in the service he met the love of his life, Ruth Winifred Marshall they were married on February 16, 1946. During his life he had many hobbies but he was most passionate about flying, boating, and tennis. He was an entrepreneur from an early age, he owned and served as CEO for Bumgardner & Company in Wheeling, West Virginia from 1946 – 1977. Locally he was a member of the Gallatin Rotary Club. Throughout his life he was a member, and served as an officer of countless clubs and organizations. Some of his most memorable was being a member of the Boy Scouts of America and being awarded the Silver Beaver Award, International Executive Corp serving in Brazil and Thailand, member of the First Presbyterian Church Highlands, North Carolina, member of the Vance Church Wheeling, WV, member of the Professional Engineers Society, and a Phi Kappa Psi Social Fraternity member. He was loved by all who knew him and will be deeply missed. He is survived by his loving wife of 67 years, Ruth Winifred Bumgardner; children, Judith Lee Mazzeo, Karen Sue Bumgardner Harms, Janice Lynn Woodard; Grandchildren, William Ralph McMichen, James Allen McMichen & Meredith Lorraine Woodard, Daniel Lee Harms II Laura of Atlanta, GA; great-grandchildren, Andrew Allen McMichen, Ethan Alexander McMichen & Sarah Annyston McMichen, Caleb, Major, & Colby Harms of Atlanta, GA. A Life Celebration will be held 2pm Sunday at Hendersonville Funeral Home. Visitation will be 1:00pm – 2:00pm at HENDERSONVILLE FUNERAL HOME 353 Johnny Cash Pkwy Hendersonville, TN 37075 615 824-3855 hendersonvillefh.com