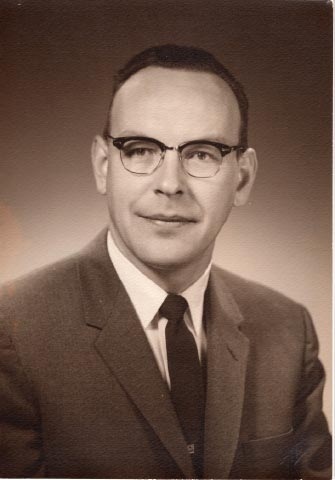 Daniel McIntyre Berry, Jr., a resident of Presbyterian Village in Atlanta, GA graduated to the Church Triumphant on July 11, 2013 at age 87 after developing Alzheimer's disease.
Dan was born on Valentine's Day in 1926 in Augusta, Georgia. The date was most appropriate because everyone who knew Dan saw that he had a big heart and a deep love of God, of people, of music, of humor, and of life. He spent most of his childhood in College Park, Georgia, where he graduated from Georgia Military Academy now Woodward Academy. He earned his B.A. in History from Davidson College in North Carolina and an M.A. in History from the University of Alabama.
Dan had many gifts as a teacher and a businessman, but he was especially talented as a musician. Despite being partially blind at birth, he learned to play the saxophone and clarinet by ear. While in school in Tuscaloosa, he created the Dan Berry Sextet with the plan to use his earnings from the band to pay for his education. After he finished graduate school, the Dan Berry Sextet performed all over the southeast, and several of his band members went on to distinguished careers with national franchises such as Les Brown's Band of Renown.
Dan married and decided to find a career with less travel and more stability. However, he remained devoted to music throughout his life, both as a vocal and instrumental soloist and, most importantly, as the longtime choir director at Hillwood Presbyterian Church in Nashville.
Dan was a gifted teacher as well as a musician. After he dispersed the band, he taught history at Georgia Military Academy and Oglethorpe University. His most memorable teaching experience ended up on the front page of the Atlanta Constitution. While he was teaching at Oglethorpe, his mother took one of his history classes to complete her teaching degree. An article about Dan teaching his own mother at the college was published on the front page complete with pictures. Both Dan and his mother were known for their sense of humor and family lore says that the class was a memorable experience for all of the students as well as Professor Berry.
Dan was recruited to join the Better Business Bureau in Atlanta. He moved up the ranks becoming head of their office in Knoxville and, eventually, director of the BBB in Nashville. Some of the most influential business persons in the area founded the local BBB board of directors. Those individuals coupled with Dan's hard work and outstanding character contributed greatly to the success of the Nashville organization. During his tenure, the BBB became an effective and positive force for integrity in business advertising, a legacy he was proud to leave the city.
Dan was preceded in death by his wife, Mary Josephine Mimi Huer; his son, The Reverend Daniel Danny McIntyre Berry III; his mother, Miriam Lanham Berry; and his father, Daniel McIntyre Berry.
Dan is survived by his daughter-in-law, Lydia Berry, of Schulenburg, Texas; a sister, Barbara Shaw of College Park, Georgia; a sister and brother-in-law, Catherine and Richard Blanton of Watkinsville, Georgia; a brother and sister-in-law, Warren and Nancy Berry of Sandy Springs, Georgia; as well as nieces, nephews, and a large extended family.
His family is thankful to his many close friends in Nashville who provided love and support to Dan through the years. We are also grateful to have had the joy of Dan's love, Dan's sense of humor, and Dan's many talents in our family for nearly 90 years. We hand him over to God with the sure sense that he has rejoined his wife, his son, and his parents in the heavenly choir where he is surely playing the clarinet with gusto.
Memorial contributions may be made to the organ fund at the Hillwood Presbyterian Church, 6220 Hickory Valley Road, Nashville, TN 37205.
A graveside service for family and close friends will be held on Saturday, July 20, 2013 at 1:30 p.m. at Harpeth Hills Memorial Gardens 9090 Highway 100, Nashville. A celebration of Dan's life and love of music will be held on July 20th at Hillwood Presbyterian Church at 3:00 p.m.