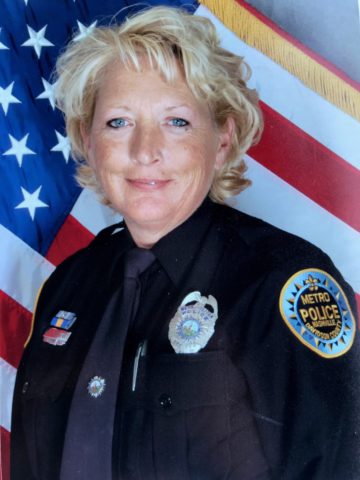 On Thursday November 14, 2019, Barbara Susan Stewart, loving mother of two children, passed away at the age of 61.
Barbara was born December 6, 1957, in Nashville, TN to John and Sarah Stewart. After graduating from McGavock High School in 1976 she went on to become a Police Officer for the Metro Nashville Police Department where she served the Nashville community for 25 years. Barbara is remembered with love by her two children Derrick and Cameron. Barbara is also survived by her sister Deborah, daughter-in-law Casey and grandson Jason.
Barbara had a passion for serving people. That passion for serving made her an exceptional and outstanding police officer. Her passion and hard work was influential to the people she served, her close friends and family in Blue, and most of all her daughter who is now excelling in her own career as a remarkable Police Officer. Barbara had a love for animals, she loved and cared for a multitude of pets including dogs, cats, and horses. She hardly passed up a stray to love and nurse back to health. Barbara’s pallbearers, representing those she was closest to in her life, now ceremonially carrying her in death, are her best friends Judy and Kim, her “adopted” daughters Lida and Coy, and her children Cam´e (Cameron) and Doogie (Derrick).
A Visitation will be held on Sunday November 17, 2019 from 2pm-8pm at Cole & Garrett Funeral Home in Goodlettsville TN. Another short Visitation will be held on Monday November 18, 2019 from 10am-11am before the Funeral Service also being held at Cole & Garrett Funeral Home. A burial ceremony will follow the Monday service at a family cemetery in Portland TN. Flowers can be sent to Cole & Garrett Funeral Home and donations can be made to MNPD Christmas Basket Program.