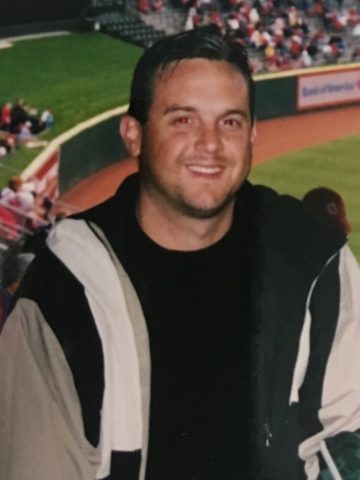 Departed on January 15, 2017 and resided in Goodlettsville, TN

Arles Scott Greene “Scotty” passed away Sunday, January 15, 2017. Scotty was born May 24, 1970 in Morristown, TN to parents Arles B. Greene and Connie Anne DePriest Ellzey.
He was preceded in death by his daughter Kaitlyn Greene and grandparents, Eugene Wright and Veda B. Greene.
Scotty is survived by his son and daughter, Bailey and Alyssa Greene; wife, Jennifer Greene; father, Arles B. and wife Debbie; mother, Connie Anne DePreist Ellzey and husband Bill; brother, Wesley and wife Elizabeth Greene; sister, Shelley Thrower; grandparents, Robert and Mary DePriest; mother-in-law, Rebecca Keller; nephews and nieces, Heath and Heather Greene, Tenssley and Addyson Thrower, Greyson Dobis.
Scotty was a much loved son, brother, husband, father and a man who loved Jesus. His children, family, hunting, fishing and being outdoors brought him great joy. From an early age Scotty began hunting and traveled the world looking to add to his collection of mounted animals. He started Scotty Greene Adventures to share his joy of hunting with friends, old and new and traveled to remote locations such as Alaska, Canada, Spain, New Zealand and throughout the US. He will be remembered as a man who gave to others his huge smile, who loved hard and played hard, who was never ashamed to talk about God with other people. He had a love of music and a fabulous voice to share with the world. Scotty had an amazing love for life that he experienced with a number of very close friends and family. He was always happiest sharing his love of hunting with his son Bailey. He worked alongside his father and brother for many years as "Vice President of ABG Caulking," in the family business and was excellent at his trade. Scotty will be remembered by his family and friends for his huge heart, his excitement for the things in life where he found his greatest joy, and he happily shared that joy with others.
A Celebration of Life will be held 10:00 a.m. Friday, January 20th at Cole & Garrett Funeral Home with Bro. Josh Brown and Bro. Rich Powell officiating. Interment will follow at Forest Lawn Memorial Gardens.
In lieu of flowers, Memorial Contributions may be made to a college fund set up in the name of Scotty’s children, Bailey Greene and Alyssa Greene. Contributions made to Volunteer State Bank, Hwy 31 W 2920, White House, TN 37188.
Visitation Thursday 4:00 p.m. until 8:00 p.m. and one hour prior to service Friday.
Arrangements by Cole & Garrett Funeral Home, 127 North Main Street, Goodlettsville, TN 615-859-55231