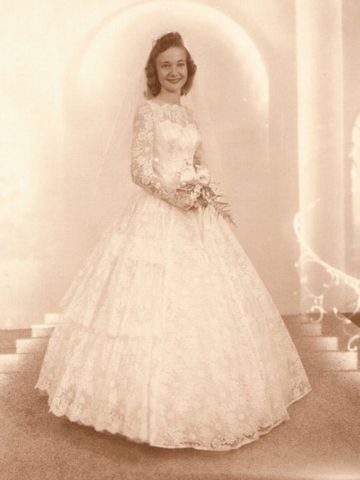 On Saturday, May 25, 2019, Annaliese Theresia Lenhard, a loving wife, mother, and grandmother, went to be with the Lord at the age of 81.

Annaliese (Lee) was born on May 14, 1938 in Queens, New York, to Berthold and Anna Kretschmer. She grew up in Lake Grove, NY where she worked as a telephone operator with the New York Telephone Company until she married the love of her life, Walter Lenhard, on June 27, 1959. Walter was in the Navy for over 20 years; during that time, they moved to places including Portsmouth, NH, Norfolk, VA; Charleston, SC, and Groton, CT, before finally settling in Gales Ferry, Connecticut, where Lee worked as a housewife, raising their children Walter, Jr., Donna and Christine. In 1997, Lee and Walt moved to Leesburg, Florida, where she lived until 2018. She moved to Nashville, Tennessee in January 2019. She enjoyed spending time with her grandchildren, needlework, playing bingo, making porcelain dolls, and gardening.

Annaliese was preceded in death by her husband, Walter George Lenhard; her parents, Berthold and Anna Kretschmer; a brother, Frederick Kretschmer, and a sister, Irma Kretschmer. She is survived by her children, Walter Lenhard Jr. of Brookfield, WI, and his wife, Cynthia Lenhard; Donna Lenhard of Norwich, CT; and Christine Marshall of Springfield, TN; grandchildren, Nicholas Lenhard and Meghan, Emma and Olivia Marshall; and a sister, Hilda Manitta of Centereach, NY and all of her special nieces and nephews. She also leaves many wonderful friends including Annamay Miller, Joan and Don Ross, and Dorothy Wockenfuss. Special thanks to the staff at Grace Manor Assisted Living and Alive Hospice in Nashville.

In lieu of flowers, donations may be made online in her name to the Humane Society or the American Cancer Society.

Interment will be with her husband at Florida National Cemetery at Bushnell at a later date.